For those EOR-worthy oil fields whose geological characteristics would respond better and produce more oil by using N2 and/or CO2 Gas Injection EOR processes, Texas EOR will employ the latest next-generation exhaust gas injection equipment providers and the EOR sub-contractors to implement it safely and successfully.

Texas EOR Associates’ E4EOR solvent in its liquid form can be atomized for insertion into a gas-injection stream for “solvent-assisted gas injection EOR” – using the pressure of the flowing gases to carry the E4EOR droplets through reservoir pore-space for making contact with the stranded oil.

In its gaseous form, the E4EOR chemicals can be vaporized by the heat of the compression gases into which it can be injected for “vapor-phase solvent-assisted gas injection EOR” – using the injected gas pressure to deliver the E4EOR in its gaseous form farther and more effectively through the reservoir pore-space to the stranded oil deposits.

Because gas has low viscosity, it freely flows through reservoir pore spaces in the path of least resistance, channeling through larger pores in higher-permeable regions of the formation (and along the top of the reservoir) and in naturally-fractured formations, while by-passing the smaller pores in lower-permeable regions (without displacing their valuable oil deposits).

To delay and even prevent CO2-channeling and early breakthrough that bypasses valuable oil deposits, the oil industry is starting to use CO2 foams to reduce CO2 gas mobility issues in highly permeable sands.

What is unique and promising about the E4EOR solvent/surfactant technology is that it can also be whipped up with regular air or specific gases to make a solvent-based FOAM that is very sticky and can greatly increase “residence time” of the E4EOR solvent chemicals in reservoir pore-space.

Increased residence time for EOR injectants in an oil reservoir allows the injected E4EOR chemicals to contact and release more oil molecules from reservoir pores, while at the same time, inhibiting the formation of pore-clogging Asphaltenes and Paraffin Wax precipitants, which could otherwise prevent the E4EOR surfactant-released oil or CO2-released oil from flowing to the production well for extraction.

E4EOR StickyCO2 Foam is expected to make the CO2 gas act like a liquid, making it more viscous and better able to sweep through the reservoir pore spaces, pore throats and push out the fluids. The foam is expected to deliver multiple chemical injectants all-in-one foamed mixture; for CO2 EOR it can increase CO2-to-oil contact and, at same time, reduce CO2 gas channeling in the reservoir (that causes injected CO2 to by-pass valuable oil deposits – the bane of every CO2 EOR Engineer) in order to increase ultimate oil recovery.

Injectant foams offer the oil industry better mobility control and sweep efficiencies by driving injectants through reservoir areas of varying permeabilities, so that the valuable, recoverable oil is not by-passed and left behind.
For CO2 gas mobility problems (gas-channeling / gas-breakthrough), StickyCO2 foam can first be injected into a heterogeneous oil reservoir, such that the path of least resistance will cause the injected foam to flow first into the highest-permeable zones in the formation. 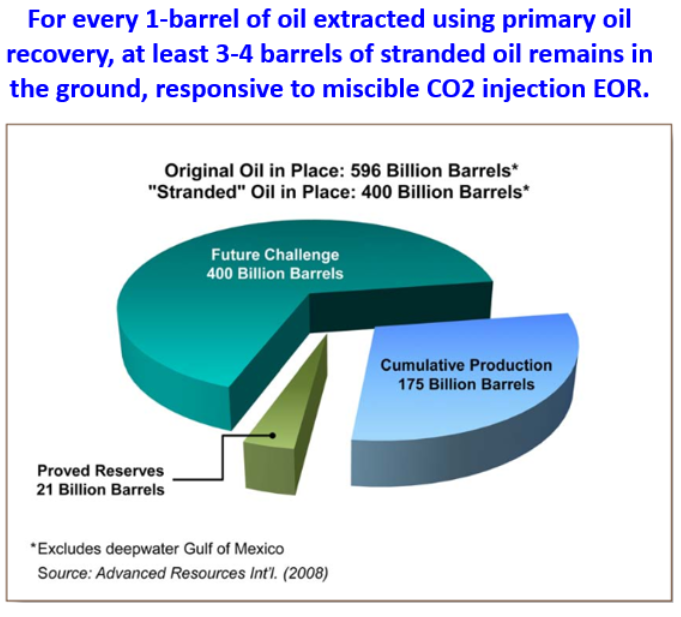 As much as two thirds of the nation’s known oil resource remains “stranded” and may not be recoverable without the development and use of advanced EOR technologies.

EOR is a way to squeeze out additional, hard-to-recover barrels of oil remaining in older fields following conventional production operations.

It can also be used to permanently store carbon dioxide (CO2) underground.

Thanks in part to innovations supported by the Office of Fossil Energy’s National Energy Technology Laboratory (NETL) over the past 30 years, the United States is a world leader in the number of EOR projects (200) and volume of oil production (over 350,000 barrels daily) from this method. This represents nearly 14 percent of total U.S. production. Although there are other methods (such as steam and chemical injection), CO2 injection is responsible for the largest single portion (40 percent) of U.S. EOR production.